On 11 and 12 January 2018, Marc Bongaarts of the Stedelijk Museum Amsterdam (SMA) transported a painting by Jasper Johns to The Broad Museum in Los Angeles in a special vibration and shock isolated box.

We are asked to monitor this transport with a Lansmont SAVER 9x30, a datalogger equipped with GPS that records the shocks, vibrations, temperature, humidity and air pressure during the journey. The datalogger has a 3D internal acceleration sensor (Ch1-3), which is mounted on the bottom of the box and 2x 3D external sensors (Ch4-9), which measures the inner box where the final artwork is packaged.

The artwork was transported by a truck from the SMA depot to Schiphol airport. When arriving at Schiphol, the transport box was placed together with several other crates on an aircraft pallet (type PMC) and prepared for transport. The aircraft pallet was placed on a special transport cart (trolley) and transported to the aircraft via the outside at the airport. During this transport (on the Rinse Hofstraweg-South) in total 8 shocks were recorded between 4 and 7g. These undesirable shocks were probably caused by stelcon plates in combination with the stiffly transport trolley.

Arriving at the Boeing 747-400 aircraft, the crate was loaded and placed at position XR (in the back of the plane) and the plane left for Los Angeles. During the Takeoff, vibrations were measured, with the natural frequency between 6 and 7 Hz (0.0013 g2 / Hz). Low vibration levels were recorded during the flight, the largest vibrations were between 13 and 18Hz. Obvious during this flight was that the air pressure dropped from 1,021mbar to 807mbar. The temperature dropped from 20 degrees to 16 degrees.

No heavy shocks or vibrations were recorded during the landing at the Los Angeles airport.

During the transport from the aircraft to the logistics hall, 10 shocks were measured between 4 and 6g. Probably this was again caused by stelcon plates in combination with the stiffly transport trolley.

When leaving the airport, the artwork was transported in a very special sprung truck. This one had a single rear axle that was air-suspended and a leaf-sprung front axle. Because of this combination the driver was probably well shaken, but the transport case was damped by the air suspension, because the highest primary frequency was at 2Hz (0.0018 g2 / Hz) and the secondary between 14 and 25Hz (0, 00008g2 / Hz). These are therefore very low values.

Arrived in The Broad, the artwork was unpacked and although its long journey it has arrived completely undamaged.

We thank Marc Bongaarts of the Stedelijk Museum Amsterdam that we may use this information and present it in a PowerPoint presentation on our website. By sharing this valuable information, we can serve our customers even better, so that the theoretical (ASTM and ISTA) test programs get a more practical approach.

If you want to monitor your transport and know which transport influences are released on your product, please contact us. We have several types of dataloggers available to fulfill your wishes. 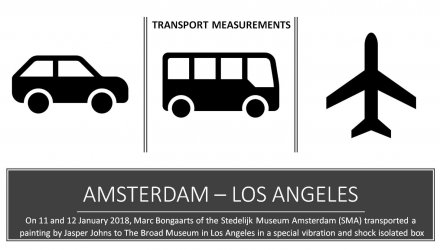